DeNOTE’s philosophy is one of creative engagement with eighteenth- and early nineteenth-century musical notation, taking the score as a starting-point for an exploration of the sound world of Haydn, Mozart, Beethoven and their contemporaries. We view scores as scripts, rather than texts: foundations for the creation of meaning in performance, rather than ‘set texts’ to be memorised, then correctly recited. The Music is not the Score. It’s more like conversation (speaking – listening – responding) in real time: the Performance of MEANING, not just the (re)reciting of a text. 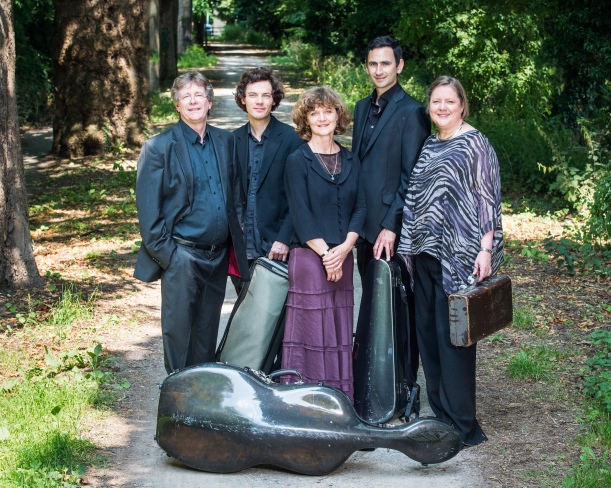 Not surprisingly, then, we often look at musical texts afresh in our performances. And that has led us quite often in the direction of late 18th/ early 19th-century arrangements of works by Mozart and Beethoven in particular. And that was the starting point for…

Classics By Arrangement – the title of Ensemble DeNOTE’s three concerts this spring/ summer at St John’s, Smith Square in London. In these concerts, we explore celebrated chamber music by Mozart and Beethoven in unfamiliar arrangements made by the composers themselves, their pupils and contemporaries. We conclude our series on 10 June with a programme that includes Beethoven’s own Piano Trio arrangement of his Second Symphony, Op.36.

Beethoven only rarely arranged his own compositions for other media. His Septet (which we performed earlier in this series in its Trio version, Op.38) is one example; another is his Symphony no.2, with which we end our ‘Classics By Arrangement’ journey. Composed in 1801-2 and first performed in April 1803, Beethoven’s second symphony was completed at the village of Heligenstadt where he had spent the spring and summer of 1802 in an attempt to improve his health, and especially his declining powers of hearing. It was at this time that he faced the realisation that his hearing loss would be permanent, and we may be forgiven for wondering if passages such as the first movement Coda express something of Beethoven’s gritty defiance against his fate. Yet much of the work transcends autobiography; stylistically, it can be understood within the framework established by Haydn’s late symphonies, and towards the end of the first movement Beethoven even models a harmonic progression on one found in Haydn’s famous ‘The Heavens are Telling’ chorus from The Creation. His arrangement for piano trio is remarkable for its reimagining of texture, retaining with just three instruments the energy and power of the orchestral original.

Of all the works in our ‘Classics By Arrangement’ series this year, this is the one that, for me, most brilliantly expresses a paradox in which the ‘Work’ is simultaneously an idea transcending its capture on the page in any ‘definitive form, and also an expression that inhabits the particular form of its representation. While Beethoven’s Op.36 is, of course, an orchestral work, it is equally a piano trio. The idea of Op.36 is fully present in both representations. What a trio combination might lack in terms of sheer volume, compared to an orchestra of perhaps 40 players, is compensated in the arrangement by the composer’s skillful handling of texture. In terms of sheer energy Beethoven retains so much of the idea of the Second Symphony that it is, I believe, wrong to think of the trio version as a ‘mere arrangement’ – as if it were a ‘lightweight’ salon-substitute for the ‘real thing’. One way in which he captures the orchestral scale of the original is through his handling of the piano, which is regularly bursting at the seams. In 1802 Heethoven had still not taken delivery of his Erard; he had encountered the amazing pianos of the Streicher firm, and was likewise fully conversant with the instruments of Walter – he played both types in his Viennese performances. He was also aware, and perhaps frustrated by the typical 5-octave range of these instruments. He frequently stretches the instrument to the limits of what it can bear in the Op.36 Trio. So if the audience is on the edge of their seats when they hear it, I can guarantee that, when playing it, so am I!